During Google Cloud Next ’19 (April 9-11, 2019) flurry of announcements, a technical detail with significant business impact surfaced. Google Cloud’s new Anthos hybrid and multi-cloud platform depends on VMware vSphere if an IT shop wants to containerize legacy applications that use local storage.

Anthos is built on top of Google Kubernetes Engine (GKE) On Prem. GKE On Prem in turn depends on installing VMware vSphere on prem. Of all the partnerships and initiatives VMware has with all the cloud service providers, this underlying dependence of Google Anthos on vSphere is a uniquely strategic dependence.

GKE On Prem’s reliance on VMware vSphere abstracts the storage hardware manufacturer relationship away from Google Cloud. All major brands of data center servers and hyperconverged infrastructure certify their gear to run a range of VMware software products. Hardware manufacturers must certify VMware software on their products to create IT customer confidence in those products. VMware certification is not optional go-to-market support.

This strategic detail was buried in a pre-event briefing with Robin Systems and in a Google Cloud Next technical session about GKE On Prem (which further shortens to GKEOP in the session slides). Google Cloud showed vSphere kind of hanging in space in a couple of slides, something I probably would have missed if I hadn’t have talked with Robin Systems beforehand.

Then the presentation confirmed vSphere is “currently the default storage class in GKEOP” and even mentioned deploying on a specific version of vSphere (version 6.5).

Optiva was more direct in mentioning its dependence on VMware’s vSphere, vCenter and ESX Cluster software 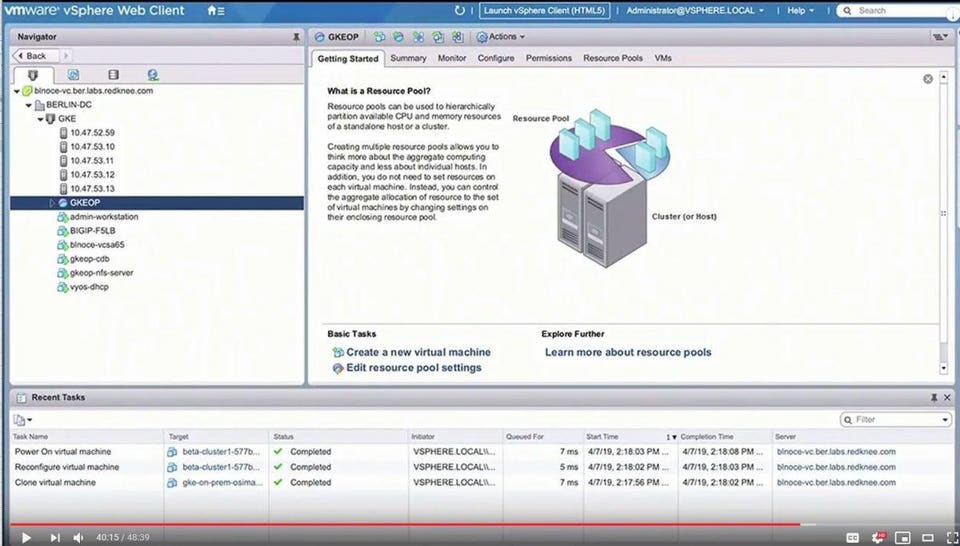 Google Cloud, Optiva and Arctiq used VMware’s vSphere Web Client during their live demos to configure a resource pool of servers and storage

Mr. Seetala said, “using the vSphere ecosystem improves Google Anthos time to market.” Enterprise applications specify how much storage capacity they need and what kind of media, what kind of protections the storage needs, such as replication, and what kind of governance to apply to the storage, such as encryption and privacy controls. For example, by using middleware like Robin Storage for GKE, enterprise application developers do not need to know the details of how storage is connected to containers in their specific enterprise data center to perform a snapshot. They simply ask Robin Storage for GKE for a snapshot.

This is similar to one aspect of Microsoft leveraging Dell EMC to bring Azure Data Box Edge to market, which I wrote about in October. Microsoft had a choice of many hardware suppliers that might have successfully fulfilled Microsoft’s edge computing and storage requirements. Microsoft’s decision most likely boiled down to a global partnership with Dell EMC Services. For Microsoft Azure Data Box Edge, the hardware is lightly customized, but the business relationship enables Microsoft to support all the edge deployments. On prem data center hardware support is not something Microsoft Azure should aspire to build from scratch.

Before anyone gets too worked up about what is open source and what is not, it’s worth noting that Anthos uses a lot of open source projects although Anthos is not entirely open sourced itself. However, it is a little curious that VMware and vSphere are not mentioned on Google Cloud’s Anthos page, even though the VMware logo appears on the page.

Kudos to VMware and to Dell Technologies VMware’s parent company. Analysts are continually bombarded by organizations loudly announcing “strategic” deals that are not. It’s nice to occasionally discover a quietly implemented but truly strategic maneuver.

This article was written for Forbes, the original article can be found here.